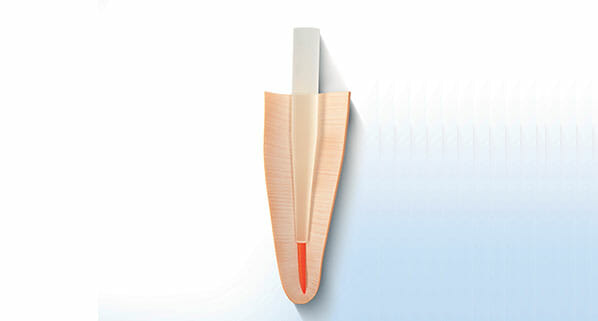 Teeth that undergo endodontic treatment with large coronary destruction are common in the dental practice and, in those cases, it is critical to recommend intra-radicular retainers for the reestablishment of their mechanical resistance.

Dental posts have been widely accepted and used. They present an elasticity module that is similar to that of the dentin, they absorb tensions generated by the masticatory forces and protect the radicular remains, allowing for the construction of a mechanically homogenous unit. However, the use of pre-manufactured dental post in wide canals or in canals with a differentiated anatomy may be considered critical when there is a substantial lack of adaptation and a thick line of cementation.

Thicker layers of cement are prone to flaws due to the presence of bubbles and to the increase in tension caused by the shrinkage of polymerization, responsible for the occurrence of fracture lines, which may lead to the dislocation of the dental post once the bonding strength is compromised. To improve the adaptation in wide canals, FGM developed the dental posts type DC-E which have a thin apical portion and a conservative cervical portion that is wider and more resistant.

In spite of the more adequate format, canals with a differentiated anatomy (exaggerated amplitude and not conical/oval) are frequently found and, in those cases, the best choice is to perform a technique called anatomic dental post. That technique involves the use of a composite to mold the root canal in order to decrease the cementation line.

Composites have high resistance to compression when they occupy the spaces between the wall of the canal and the dental post, leading to excellent retention. When using that technique, the polymerization of the composite happens aside from the cementation process, eliminating the risk of fractures from the polymerization shrinkage and without adding cementation lines (in cases when accessories for the adaptation of the dental post are used, for example), increasing longevity.

With the anatomization of the dental post, a single line of cementation with small thickness is achieved, minimizing the possibility of adhesive flaws.

Want to join the discussion?
Feel free to contribute!